Measurement of the heat flux normalised spin Seebeck coefficient of thin films as a function of temperature, Rev. Sci. Instr. 91, 073910 (2020)

Towards a standard spin Seebeck Measurement (2017)

Spin caloritronics describes the field of research that bridges the gap between spintronics and calorimetry. An example of the phenomena observed is the spin Seebeck effect: generation of a spin polarised current due to a temperature gradient. This effect was first measured by way of the inverse spin Hall effect by Uchida et al. (Nature Letters 455, 778 (2008)). One advantage of this field of research is the potentail to break the Wiedemann-Franz law that currently limits the efficiency of thermoelectric devices, thus boosting development of (waste heat) energy harvesters.

The magnetocaloric effect manifests as a change in temperature of a material on adiabatic application of magnetic field as a result of conservation of entropy. Recent research into this effect has focussed on the potential application for room temperature magnetic refrigeration as a more efficient alternative to the current gas compression technology. Current research challenges include material availability, machinability, thermal control and cycling fatigue. 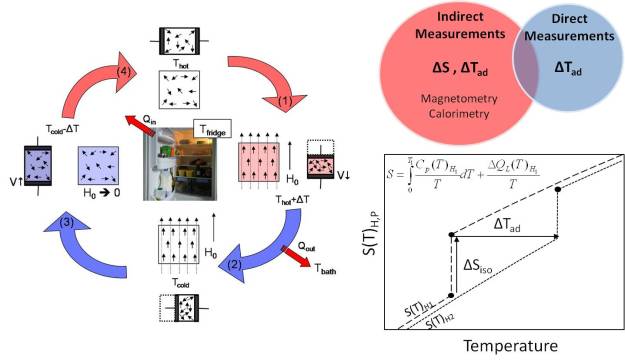 There several fundamentally different methods for measurement of the heat capacity of a material. Perhaps the most widely known is the adiabatic calorimeter deeloped by W. Nernst: perhaps the most accurate technique for determination of the heat capacity, but which requires long timescales and large samples (~ grams). Differential Scanning Calorimetry (DSC), on the other hand, is the more accurate when the determination of the total heat flux across a first order phase transition (where latent heat is present), is required. When comparing data obtained using different apparatus there are several factors that need to be considered including the sample preparation, demagnetisation field, calibration procedure and data analysis routine.

Developing the use of (quantum [systems) engineering] methods to accelerate the translation of potential quantum technologies into practical devices.